Published by The Prince George’s Sentinel

“I am so honored this afternoon to be able to welcome you to an endorsement for our next Governor of the United St- oh governor,” Tuner said as the room filled with Brown’s ardent supporters erupted in laughter. “The United State of Maryland,” she joked.

Brown has represented Prince George’s County in the Maryland House of Delegates, chaired the Governor’s Subcabinet on the military base realignment and closure process and served a tour of duty in Iraq as a colonel in the U.S. Army Reserves. He publicized the endorsements of Hoyer, Miller, Turner and 21 other public officials Monday. 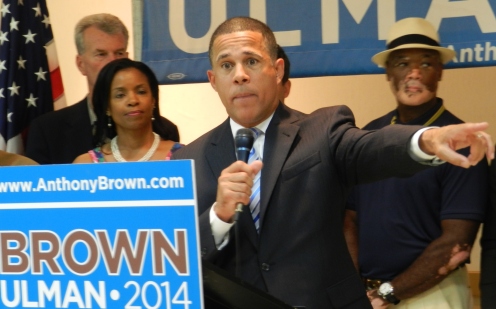 Hoyer rattled off the eight governors he has worked with in Annapolis. But, he distinguished Brown as a “battle-tested” man of courage and conviction.

Hoyer pointed to the accomplishments of the O’Malley-Brown administration, including expanding affordable healthcare coverage, helping Marylanders recover jobs from the recession and lowering violent crime rates by instituting harsher penalties for perpetrators of intimate partner violence and the “most responsible gun safety laws in the county.”

Prince George’s County has decreased total crime by more than 30 percent, including the 39.1 percent reduction in violent crime from 2006 to 2011. During that time, health care coverage was expanded to 290,000 previously uninsured Marylanders, Gov. Martin O’Malley said.

Brown led the effort to prepare Maryland for the arrival of 60,000 military base realignment and closure related jobs, according to his biography on the state government website.

“He (Anthony Brown) wasn’t just a lieutenant governor off in the wings. He was in the center of activity,” Hoyer, the longtime representative said. “He’s been there, done that and succeeded.”

The Minority Whip rejected the notion of an old boys’ network during his more than 13-minute remarks. Then the lieutenant governor began his speech by saying “endorsements are about relationships.” 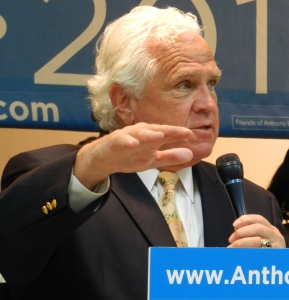 Brown thanked Hoyer and Miller for their endorsements, mentorship and decades of public service.

“Together we have moved Maryland forward, building the best schools in the nation, making college more affordable,” he said.

Brown almost immediately qualified his statement on the FBI building as “aspirational.” Still, his supporters are quick to praise his boldness.

“He (Anthony Brown) doesn’t mind being held accountable because he delivers,” Turner said.