A coworker (whom I had never met) hopped on the transit bus I was driving in the fall of my sophomore year of college. She took one look at my calves in soccer shorts and recruited me to play on her team, the Maryland Women’s Rugby Club. 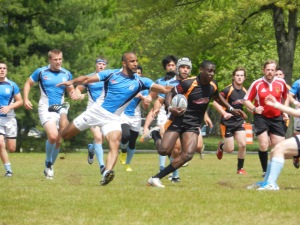 I had never played rugby, but I felt like the opportunities to tell stories through a rugby lens was something rarely seen in traditional media publications. I only played for a semester, but once I earned my way into Maryland’s esteemed journalism program, I tried to find creative ways to tell stories that weren’t being told. And, as a student-freelancer, that often led me back to the rugby pitch.

This post highlights a few of my rugby photos and other projects, including an article about a friend that I had written for my first-ever reporting class. The professor reached out to The Prince George’s Sentinel, and it became my first real, published article.

The 22-year-old applied to the Prince George’s County Police Department during the spring, passing the written exam and agility testing as well as a preliminary screening questionnaire. Now she waits for the call to schedule an initial interview.

Gouws anticipates her rugby experiences will help her become a better police officer.

“If they get away, I’ll tackle them,” said Gouws, whose rugby opponents would likely warn suspects to disregard her neon-painted nails. Her trademark stiff arm and elite physical fitness are what they should worry about.

“I creamed the men and women because of physical fitness, upper body strength. It made me faster. That will help me in a long or short foot race,” she said.

Gouws is a dual citizen who immigrated to the United States at age 8. She learned English in a year. She learned the game of rugby as a young girl, watching her mother play on the South African pitches, more than 8000 miles away.

She began playing rugby as a junior at Bethesda Chevy Chase High School in Montgomery County, nearly 11 miles from Maryland’s flagship campus. At the University of Maryland, she became captain and starting fly half and has been recognized twice as an All-American by USA Rugby.

Gouws acknowledges that moving to America at such a young age and being away from most of her immediate family have certainly been challenging. But she maintains that her rugby experiences have had more of an effect on shaping who she is today.

“On the field, we need to play together as a team and have each others’ back,” said Gouws, whose strength and unwavering attitude is unmatched. “You’re not always going to have someone around you with the same goals.”

Gouws once aspired to represent the United States in the 2016 Women’s Rugby World Cup but now is reluctant because she fears her professional ambition to become a police officer could be hampered by a rugby injury.

Rugby is an injury-prone game. Gouws — nicknamed the “Dalmatian” because her legs are spotted black and blue with bruises — has sprained her MCL and describes her most recent rugby injury as a lateral shoulder tear.

The two-time All-American was recognized as the 2010 Backs MVP for the Mid-Atlantic Rugby Football Union in addition to being voted by her Maryland peers as the Best Back and Best Overall Player for two semesters.

Voted co-captain of the 2010 All-America team, Gouws was the only player to score a try in a weekend rugby tournament. She has attended four U.S. Eagles Development Camps and has represented the national team twice wearing the U.S. Eagles jersey.

“I can’t sit behind a desk,” said Gouws, who is accustomed to having the ball, making tactical decisions and calling all of the plays as the playmaker on the pitch. She admits to being impatient in the waiting process to become an officer.

The lengthy selection process also includes a background investigation, polygraph, oral interview and psychological and medical exams before certification into the police academy.

An Equal Opportunity Employer, the Prince George’s County Police Department is the fourth largest law enforcement agency in Maryland with more than 1,400 police officers, according to the department’s website.

Department statistics show that about 1.25 percent of the total applicants in 2009 were females accepted into the academy and in 2010 that percentage dropped to less than 1 percent. In those years, only about 67 percent to 68 percent of applicants passed the written and agility testing as Gouws has done, according to police estimates.

As she awaits the phone call to schedule an initial interview, she continues her studies at Maryland in criminology and works part time for Police Auxiliary on campus.

Much of what draws Gouws to law enforcement comes from what drives her passion for rugby.

“Someone who wants to give advice to people who need help and keep peace on the team,” is how Gouws explains her role on the rugby pitch. This reverberates in what it would mean to her to become a police officer.

“I love helping people out. I want to help people who aren’t able to stand up for themselves,” she said.